Some maps and guidebooks

I want to start with a story from Melville's life and fiction that illuminates one of the key themes of this book.

Melville's fouth novel, Redburn (1849), tells the story of Wellingborough Redburn's trip on the Highlander, a merchant ship bound for Liverpool. The account was a fictionalised version of Melville's own visit to Liverpool in 1839. Redburn takes with him his late father's guidebook that his father had obtained when he visited the city as a wealthy merchant. 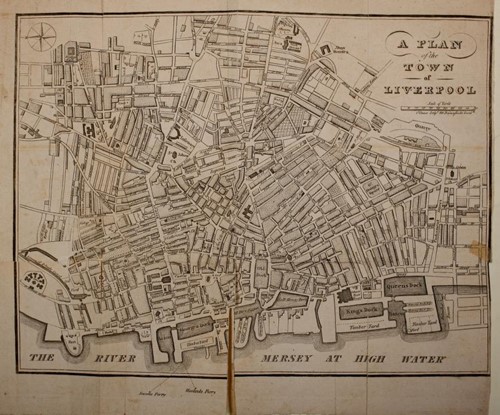 Redburn imagines that since his "own father had used this very guide-book, and that thereby it had been thoroughly tested, and its fidelity proved beyond a peradventure", he "could not but think that I was building myself up in an unerring knowledge of Liverpool; especially as I had familiarized myself with the map." As Redburn explores Liverpool, however, he finds his father's guidebook an increasingly poor reference point. "I little imagined that the Liverpool my father saw, was another Liverpool from that to which I, his son Wellingborough was sailing[...] the bare thought of there being any discrepancy, never entered my mind." Liverpool had changed considerably since his father's visit. The "Riddough's Hotel, where my father had stopped, more than thirty years before" has been pulled down. The fort that Redburn searches for is now a pub: "how", he wonders, "could a tavern be mistaken for a castle". Redburn realises that as his "father’s guidebook is no guide for you, neither would yours (could you afford to buy a modern one to-day) be a true guide to those who come after you":

Guide-books, Wellingborough, are the least reliable books in all literature; and nearly all literature, in one sense, is made up of guide-books. Old ones tell us the ways our fathers went, through the thoroughfares and courts of old; but how few of those former places can their posterity trace, amid avenues of modern erections; to how few is the old guide-book now a clew! Every age makes its own guidebooks, and the old ones are used for waste paper.

The Moby Dick on the Mersey Project provides an interactive map of Herman Melville's visit to Liverpool, based on the orginal guidebook that Allan Melville may have used and shared with his son. The project provides a map that attempts to overlay Melville's/Redburn's travels around Liverpool, but in compiling that map, the project found itself confronting the challenge, similiar to that experienced by Melville himself, of change: in this case, how much the "city has changed since the mid-nineteenth century":

Buildings and streets that Melville describes no longer exist, making it impossible to map the city that Melville knew onto the modern landscape with complete accuracy.

If we go back to the the Advertisment section for the original guidebook used by his father, the Picture of Liverpool, or Stranger's Guide: A New Edition Considerably Enlarged, we find that even in it's own time, the guidebook signals it's own failure to keep up with the reality of change and to provide a full account of the city's reality. The compiler highlights his own attempt to "carefully to revise the work throughout, and to introduce those alterations and corrections into this description which were rendered necessary by the changes that ever year are taking place in a town remarkable beyond any other in the Empire". The guidebook is already "Considerably Enlarged", yet will never be enlarged enough to cover everything that is "Liverpool", and each "New Edition" will fail to keep track with the velocity of change.

Now it is possible to argue that this velocity of change is specific to Liverpool in the last two hundred years, a city caught up in the whirlwinds of capitalism and imperalism - and certainly those wider systems stimulate unstinting motion. But in Moby Dick, Melville illustates how everything, small or large, is subject to the same indescribability and impermanence. In his book Science and Sanity, Alfred Korzybski declared "The map is not the territory". We'll come back to Count Alfred later in this book, but Melville also held maps (attempts to represent reality) separate from territories (the realities themselves). Describing the birthplace of Queequeg in Moby Dick, Ishmael writes that he "was a native of Kokovoko, an island far away to the West and South. It is not down on any map; true places never are." (Moby Dick, Chapter 12, Biographical) This profund scepticism about representations of reality is at the heart of Moby Dick, and one of the reasons it still matters as a novel.

It is also important to note that the ultimately unreliable guidebook is gifted by Redburn's father. As we will go on to see, linked to the distrust of representations of reality in Moby Dick is a distrust of patriarchial inheritance. [Olson, the gift from his postman father that contained nothing].

The point is not that guidebooks or maps are simply false or unhelpful. In fact, they can be extremely useful. Redburn at least gets a partial understanding of Liverpool from a guidebook, rather than starting from scratch. The point is that maps and guidebooks are not ultimately true. They need to be handled with care, with the knowledge that their view of the world is partial and potentially misleading.

It is in this spirit of highlighting the unreliability of maps that I want to present a series of maps for understanding Moby Dick that will be used in this book.