While writing Moby Dick, Herman Melville was looking forward in time, seeing how the powerful and terrible energies of his own culture would play out. It didn't end well. Moby Dick is therefore a prediction of what is coming but it also comes with some clues as to what to do at the end, and perhaps what might happen after the end.

Start At the End

Moby Dick is a novel about things ending, and therefore about other things starting. We start by looking at the end of the book, in which a whaling ship disappears into the ocean having failed in its pursuit of a white whale, and relating that to a lot of bigger thenmes: the end of capitalism, the of Western civilization, the end of patriarchy.

Moby Dick, through the depiction of Captain Ahab, assimilates some of the most problematic aspects of Melville's own culture and psychology. This process of assimilation, we'll argue here, allows the novel to use Ahab's energy without fulfilling Ahab's purpose, but first we'll look at what Ahab is.

Moby Dick is considered as part of a white, American literary tradition, and its author was inextricably tied to the political elite of his day. Moby Dick is a novel that has no real female characters whatsoever. All of these statements are untrue, and none of them may sound promising. Understanding Moby Dick using feminist, or anti-imperalist, or anti-capitalist views really help to illuminiate aspects of the novel that other perspectives don't reach.
While it is clearly part of a mainstream and privileged tradition, Moby Dick atempts to take apart the tradition in which it was formed, questioning capitalism and imperialism from within its own story, and to fundamentally rethink how identity works. While feminist, or anti-imperialist or anti-capitalist perspectives illuminate areas of Moby Dick in deeply challenging and enriching ways, they are not in themselves the very final readings. Indeed, they help to reveal that there are no final readings.

Moby Dick is a novel that looks squarely into the abyss of nihilism. In that sense, it is a very modern novel. It confronts what the Buddhist's call emptiness. Facing the worst, it can begin to prepare us for more skillful responses to the world around us.

Putting Things Back Together Again

The Transformation of Energy 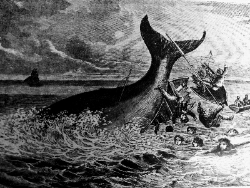